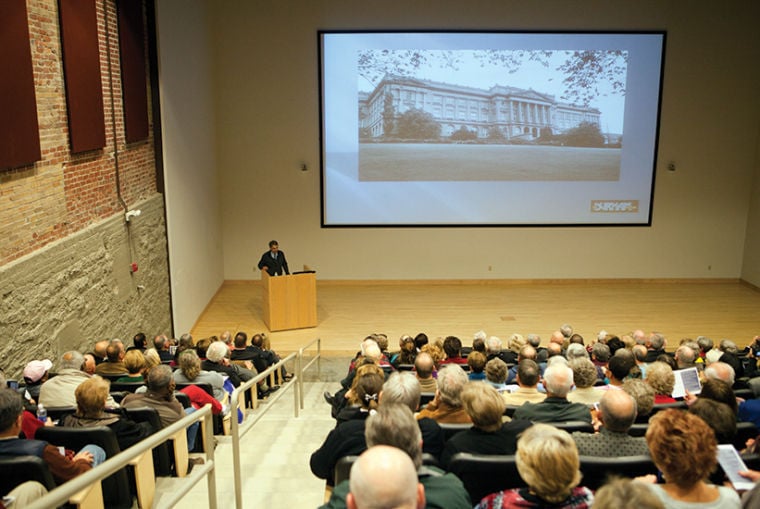 Sports writer and reporter Steve Marantz, at podium, speaks to a crowded Stanley and Dorothy Truhlsen Lecture Hall at the Durham Museum in Omaha Tuesday night. Marantz, an Omaha Central High School alumnus, delivered a presentation about the storied 1968 Eagles basketball team in accordance with his book "The Rhythm Boys of Omaha Central." The lecture was part of the Durham Museum's "The 1968 Exhibit," which runs through May 4. 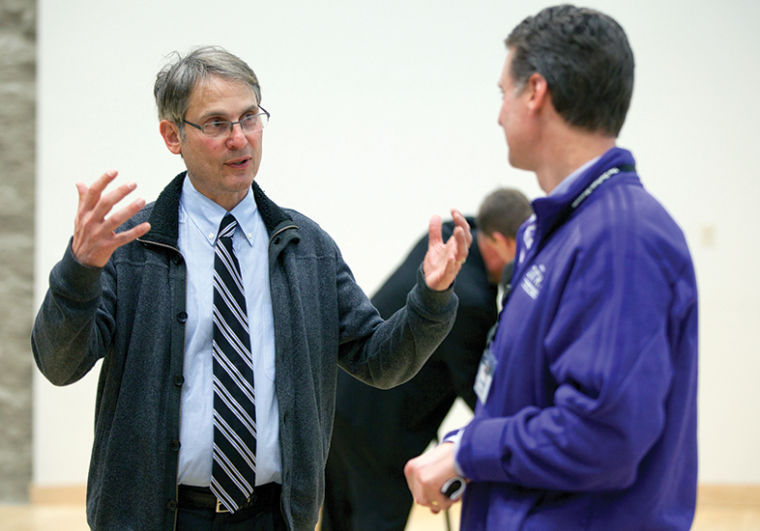 Sports writer and reporter Steve Marantz, at podium, speaks to a crowded Stanley and Dorothy Truhlsen Lecture Hall at the Durham Museum in Omaha Tuesday night. Marantz, an Omaha Central High School alumnus, delivered a presentation about the storied 1968 Eagles basketball team in accordance with his book "The Rhythm Boys of Omaha Central." The lecture was part of the Durham Museum's "The 1968 Exhibit," which runs through May 4.

Steve Marantz was golfing when he realized he needed to tell the story of the 1968 Omaha Central boys basketball team.

“We got to talking about the team,” said Marantz, who was with a member of the team at the time. “From there I started poking around and the story came together.”

So he told the tale of a turbulent year that turned into a turbulent season in “The Rhythm Boys of Omaha Central: High School Basketball at the ‘68 Racial Divide.”

Marantz, a Class of 1969 alum of the school, spoke Tuesday at the Durham Museum as part of the institution’s months-long look at a year that changed the metro area and much of the country.

In 1968 the Omaha Central boys basketball team, nicknamed the Rhythm Boys by a newspaper columnist after the No. 1 ranked Eagles knocked off No. 2 Creighton Prep, faced adversity late in the season when race-baiting presidential candidate George C. Wallace rolled through the city.

The Rhythm Boys were the first all-black starting lineup for Central and were a talented bunch, led by star center Dwaine Dillard. The book details the racial tensions in the city and country during that time, including the trouble that affected the team, including the biracial love of a player and a white cheerleader.

As the team prepared for the state tournament, Wallace came to town on March 4. The segregationist’s rhetoric led to protests – and subsequent counter-protests – at the Civic, with violence eventually erupting, with many reports of police brutality.

Dozens of protesters were injured, while a young black man was shot to death that night. Dillard was arrested when he was pulled over in a car of five others and police found fire bombs in the vehicle.

Factions raged over the fate of Dillard for the state tournament, with some telling coach Warren Marquis to dismiss the senior from the team.

But Marquis noted his star deserved due process and for the legal system to play the case out, so he suspended him the first game of the tournament for violating the team curfew.

Central won their first game without him, then beat Boys Town in overtime in the semifinals with Dillard back. The Eagles were off in the title game against underclassmen-heavy Lincoln Northeast and lost by four.

“A stunning upset,” Marantz told the crowd of about 250 people. “I think the events of those early March days affected them.”

The author talked about his time at Central during that season, one that was magical until the disappointing end. He heard whispers of the nickname “Rhythm Boys” in the halls and was friends with a pair of white players on the team. Marantz spoke reverently when discussing the great players from that ‘68 Central squad, many of which that went on to distinguished careers in places near and far.

The Omaha native now lives in Massachusetts, where he works as a producer/reporter on the ESPN series E:60. He told those gathered at the Durham that on that golf course he recounted tales of the Rhythm Boys and realized their story should be his second book.

“I thought, ‘if somebody doesn’t do this still it’ll get lost,’” he said. “I didn’t want that to happen.”