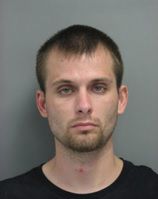 Officers found that the victim, a 47-year-old woman, had been stabbed once in the abdomen. Officers were also able to locate two suspects, Billie Jean Fitzgerald, 29, of Council Bluffs and Frank Stewart, 28, also of Council Bluffs.

Officers on scene learned that both Fitzgerald and Stewart arrived at the victim’s apartment and an argument allegedly ensued.

At one point, Fitzgerald reportedly pulled a knife from her clothing and allegedly stabbed the victim one time in the abdomen.

According to the police report, the victim later said that just prior to her being stabbed, she heard Stewart encouraging Fitzgerald and telling her to stab the victim.

Fitzgerald was taken into custody and transported to Pottawattamie County Corrections and booked for suspicion of attempted murder and going armed with intent.

Stewart was transported to local hospital for treatment of a medical condition not related to this incident. Upon his release, he will also be charged with suspicion of attempted murder and transported to Pottawattamie County Corrections.

The woman suffered non-life threatening injuries and is expected to make a full recovery.