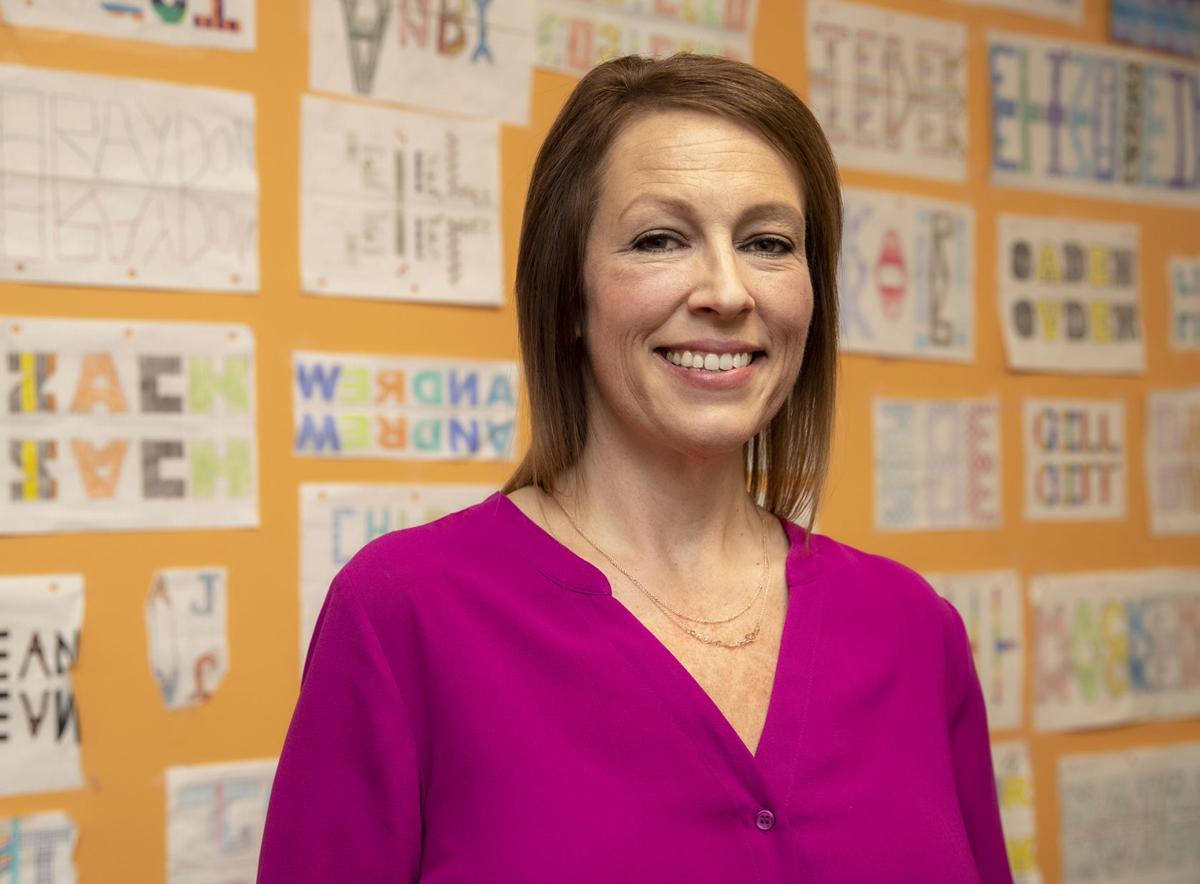 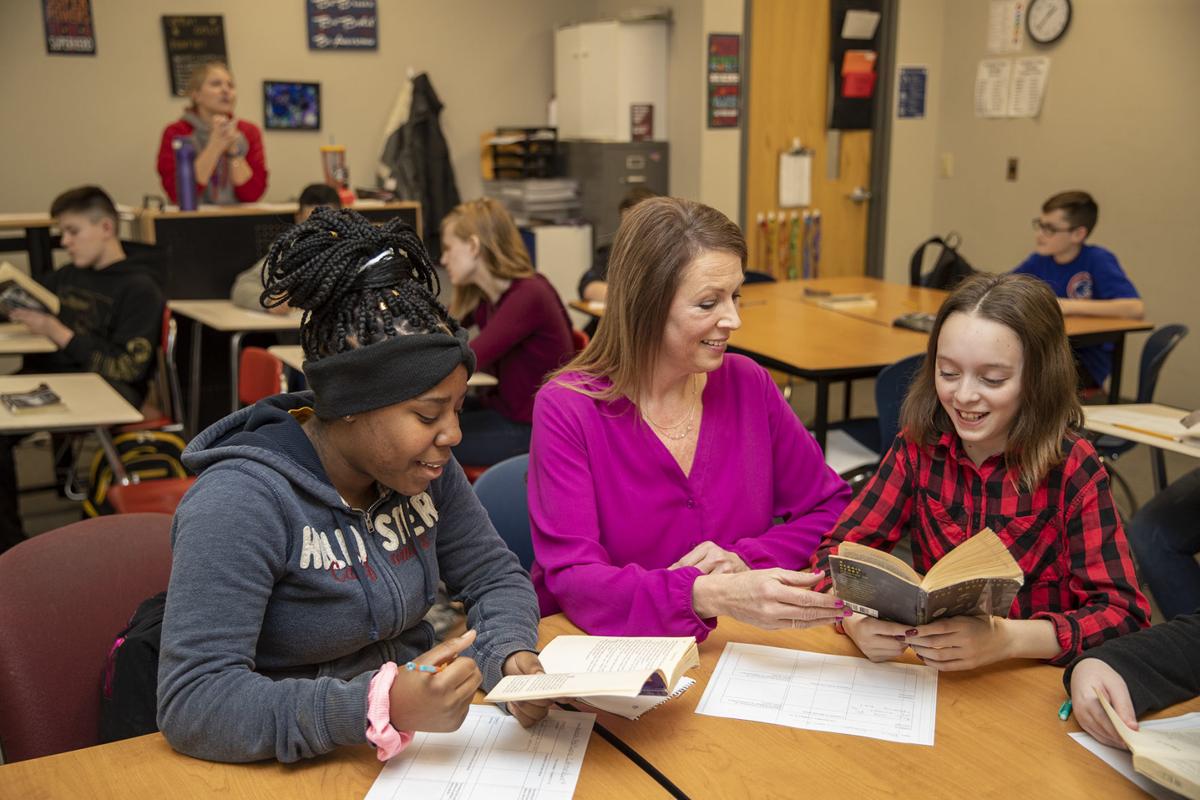 Alicia Sausedo, special education teacher and department chair at Kirn Middle School, center, drops in on a seventh grade classroom at the Council Bluffs Community School District’s Madison Campus on Wednesday. Sausedo was named the district’s Licensed Staff Member of the Month for November, but she wasn’t honored until late January as the Board of Education meeting she was supposed to be awarded at would have fallen on Christmas Eve and was cancelled.

Alicia Sausedo, special education teacher and department chair at Kirn Middle School, center, drops in on a seventh grade classroom at the Council Bluffs Community School District’s Madison Campus on Wednesday. Sausedo was named the district’s Licensed Staff Member of the Month for November, but she wasn’t honored until late January as the Board of Education meeting she was supposed to be awarded at would have fallen on Christmas Eve and was cancelled.

“I love what I do. I love working with kids.”

Living out that passion may be what led to Alicia Sausedo, special education teacher and department chair at Kirn Middle School, being named Licensed Staff Member of the Month for November.

She would have been recognized during the Council Bluffs Community School District Board of Education’s second meeting in December, but that meeting would have fallen on Christmas Eve and was cancelled. As a result, she wasn’t honored until Jan. 28, when its second January meeting was held.

Her nominator called her “extremely valuable” and said, “She has the rare combination of vision, common sense and work ethic.”

“Alicia is often called upon throughout the district, because her contributions will ensure that important work is done well,” her nominator said. “She stays calm in stressful situations, and her attention to detail and organizational skills allow the building’s special education department to function effectively and efficiently, which contributes to higher student achievement.”

“Alicia is reliable and always willing to go the extra mile,” the person continued. “And her unwavering support for students is undeniable.”

Sausedo said she appreciated the recognition, but that her colleagues in the department were just as deserving.

“Special education teachers, we all work really hard,” she said. “Everyone just gives so much of themselves in time and effort. There is a lot of hard work involved — there’s a lot of work at home.”

Sausedo started working for the district in 1997 as a special education teacher at Roosevelt Elementary School, where she taught for 15 years. She worked mainly with upper elementary students at Roosevelt and moved to Kirn when sixth-grade classes were moved to the middle schools.

She is now in her eighth year at Kirn. She focuses mostly on seventh grade, while other special education teachers at Kirn focus on sixth and eighth grades.

“I really enjoy seventh grade a lot,” she said. “I work more with pull-out groups for reading, but I do have one group I work with that is mainstreamed.”

Sausedo spends about three-fourths of her time teaching and one-fourth planning tests and accommodations, holding meetings and talking to special education staff.

“I think my strength is in communications,” she said. “I think I do a really good job helping teachers when they’re in trouble.”

Once a year, special education teachers review students’ individual education plans with their parents and other team members, Sausedo said. Hopefully, they can also communicate during the year, at least through conferences and family nights at school. If needed, the teacher can call a meeting to revise the plan or work out issues.

Growing up in Omaha, Sausedo knew she wanted to be a teacher. She was drawn to special education after taking a college course on people with disabilities.

Special education can be challenging, because different students have different abilities, Sausedo said.

“It’s about finding the right way to reach them and figuring out different ways to put some information,” she said.

It’s also about working with the student’s emotions, Sausedo said.

The staff has begun training this school year to create a trauma-informed school, Sausedo said.

“The trauma-informed approach is only about understanding what some of our students go through before they walk in the room,” she said.

Teachers can encourage a student to share by sharing with the student, Sausedo said.

“When they feel that trust and that somebody really cares for them, then they’re able to open up about what they’re going through,” she said. “And sometimes they don’t, but we can show them they have caring adults around them,” as well as food and a safe place to be.

What’s important is building relationships with students and building trust, Sausedo said. Teachers “need to help them self-regulate so they can begin to learn,” she said.

Sausedo stays in touch with some of her students.

“I try to stay connected with them as much as I can when they’re in high school,” she said. “Of course, when they graduate, that’s really great.”

Sausedo and her husband, Steve, have a 16-year-old son and an 11-year-old daughter who attends Kirn.