An artist's rendering from BVH Architecture shows the proposed appearance of the front of the Council Bluffs Community School District's Madison Campus.

An artist's rendering shows the lobby visitors will enter after going through the security vestibule and office of the Madison Campus. 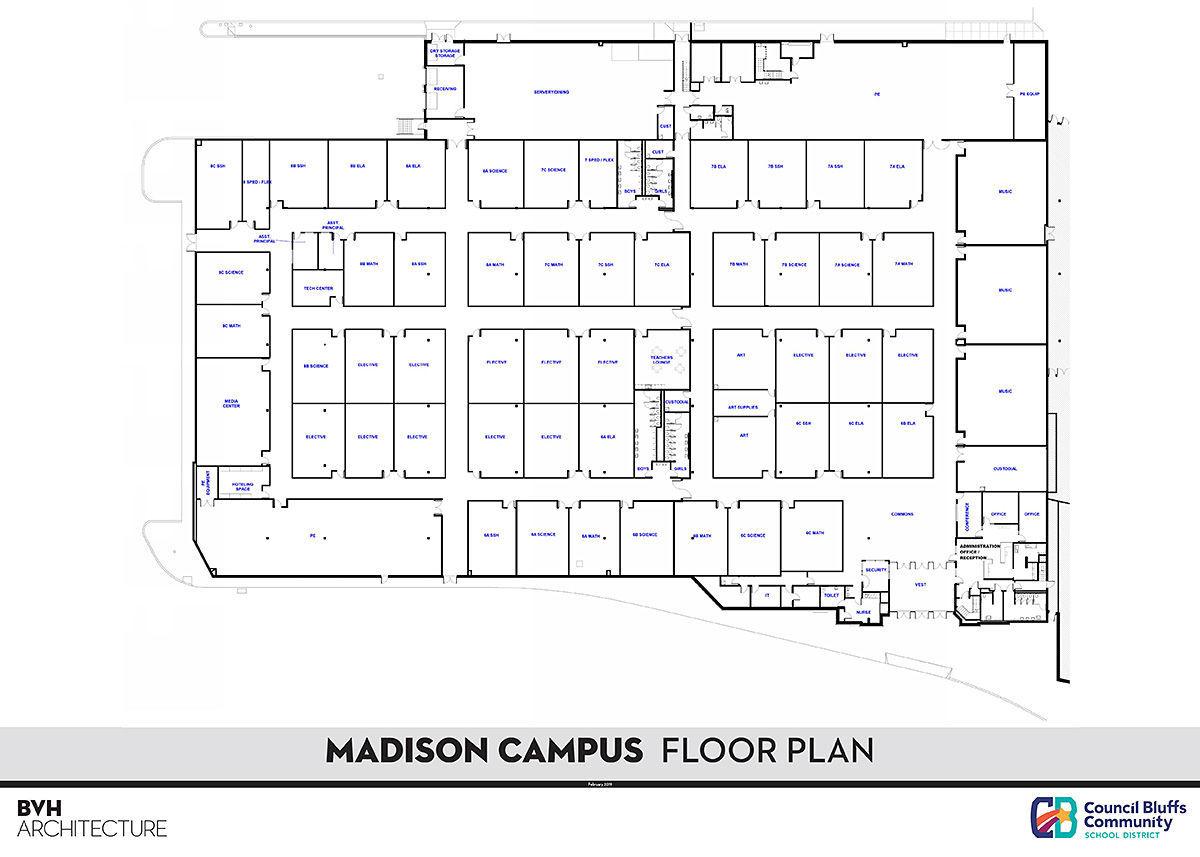 A drawing shows the proposed floor plan for the Madison Campus.

An artist's rendering from BVH Architecture shows the proposed appearance of the front of the Council Bluffs Community School District's Madison Campus.

An artist's rendering shows the lobby visitors will enter after going through the security vestibule and office of the Madison Campus.

A drawing shows the proposed floor plan for the Madison Campus.

Turning the former Target building at the Mall of the Bluffs into a middle school now appears to be more expensive than first thought.

The Council Bluffs Community School District Board of Education approved plans and specifications for the “Madison Campus” after holding a public hearing on the proposal during its meeting Tuesday. Students at Kirn and Wilson Middle Schools will attend classes there while their buildings are being renovated.

“Our primary goal is to make this look like a school and not a Target retail space,” said Darrel Meyer, project manager.

“The district will use one-cent sales tax revenue to invest in the additional repairs and infrastructure upgrades needed to ensure the Madison Campus is a safe and efficient structure that is conducive for middle school learning,” Superintendent Vickie Murillo said later.

The original estimate included the following:

• $325,316 for plumbing for new bathrooms and a new sewer line to the city connection;

“Initially, it was thought that the school could reuse the ceiling, heating and air conditioning, (life) safety system and things like that with minimal changes,” Meyer said. “But once we got into design, we realized that some of those things didn’t work.”

Upon examining the structure after the school district and Dearborn Properties closed on the sale in late December, school officials and architects added the following items and estimates:

• $1,170,000 for replacement of the rooftop units because of condition, size, building controls and partial ductwork;

• $100,000 for exterior concrete repairs, drainage, replacement of exterior doors, removal of hazardous material and installation of downspouts; and

“We found that the rooftop units could not reasonably be repaired,” Meyer said.

The fire safety equipment, wall insulation and some flooring will have to be replaced to meet current code, he said.

The hazardous material was mold on drywall in the back of the building, but it has now been removed, Murillo said.

Once completed, the Madison Campus will have a dining room (food will be brought over from Abraham Lincoln High School), media center, two multipurpose rooms for physical education, three music rooms (instrument storage cabinets from Kirn will be moved over), two art rooms with shared storage space, 49 other classrooms, two full sets of restrooms and two with single stalls, an office suite with conference room, a security office with safety vestibule, nurse’s office, offices for two assistant principals and a teacher’s lounge. There will be emergency exits in case they are needed. There will be no internal access to the public mall areas.

Students will have to do without some of the conveniences they are used to, Murillo said.

“There will not be locker rooms,” she said. “Students will not be changing their clothing for P.E. at the Madison Campus.”

Also, students will not have lockers, Murillo said.

“They will have to carry their backpacks with them,” she said. “We will be investigating the best solution for student coat storage at the Madison Campus.”

While there are classrooms for students with special needs in the Madison Campus plans, two specialized programs that serve about 45 students were slated to be moved to Wilson Middle School while other Kirn students attended the Madison Campus. Murillo and Corey Vorthmann, chief academic officer, are not sure they can replicate the kinds of facilities and equipment offered at the main buildings at the alternative site, they said in response to questions from two parents at the meeting.

However, Vorthmann said they would be willing to reconsider and could talk to parents about it at a meeting of the special education department with parents Thursday evening.

The plan is to put the project out for bid, the board to approve a bid during its Feb. 26 meeting and work to begin in March, Meyer said. Work should wrap up by the end of July so the teachers and staff can move into the facility in August.

“That’s an aggressive timetable, but we think it can be met,” he said.

Informational meetings with updates on the middle school renovation plans will be held at 6:30 p.m. Jan. 31 at Kirn and at 6:30 p.m. Feb. 7 at Wilson.