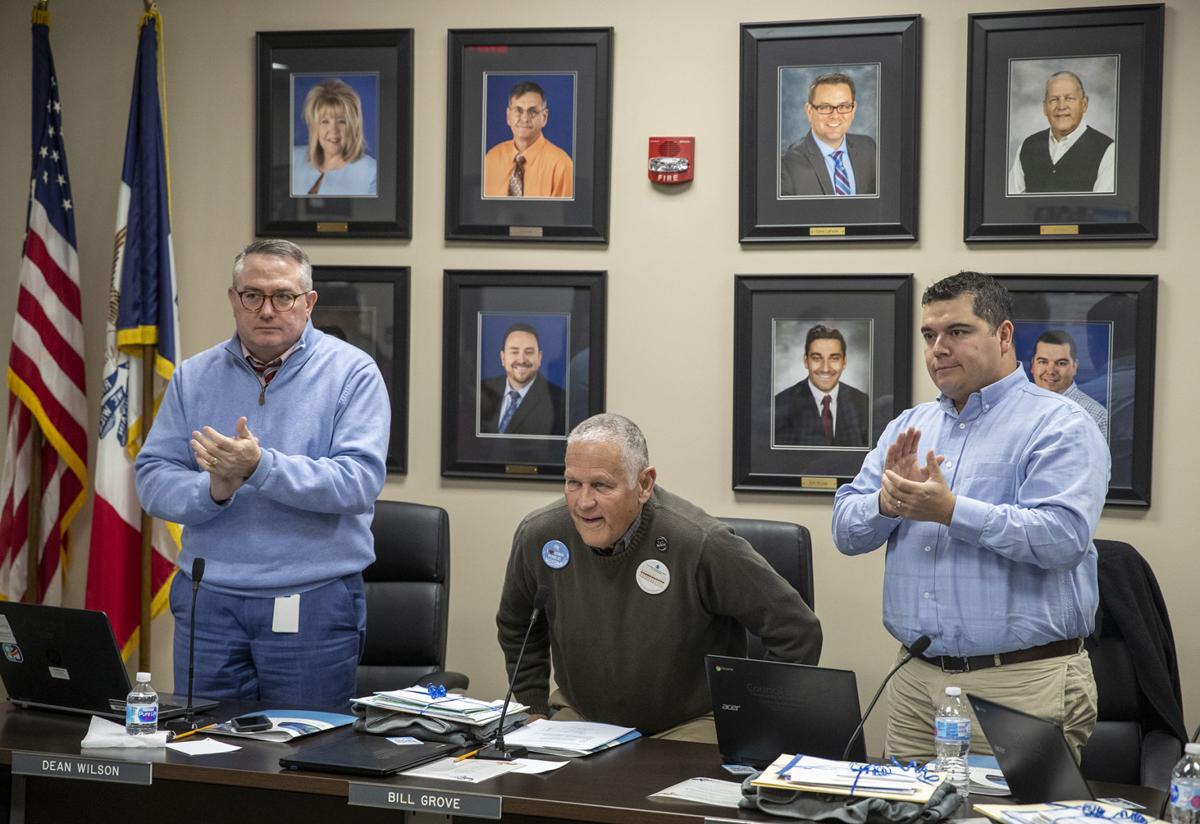 Council Bluffs Community School District Board of Education member John Minshall, right, and District Chief Financial Officer Dean Wilson, left, applaud as recently-retired board member Bill Grove, center, rises to be recognized for his 11 years of service during a November board meeting.

The state of Iowa is neglecting a program that helps the state’s public schools obtain revenue for instruction and materials, according to a statewide association dedicated to helping schools and local school officials.

The Instructional Support Levy program, widely used in Iowa, allows districts to generate an additional 10% of their regular program dollars with board or voter approval, according to the Iowa Association of School Boards. Boards may approve the program for up to five years, and voters may approve it for up to 10 years.

The Council Bluffs Community School District Board of Education voted on May 28 to extend the district’s Instructional Support Levy for an additional five years beyond its expiration date, which is June 30, 2021. Since it is only an extension, it will not change the district’s tax rate. The levy is $1.69 per $1,000 of taxable valuation, although it fluctuates slightly, based on a state formula, according to Diane Ostrowski, chief communications officer.

“The Instructional Support Levy generates in Council Bluffs $2.9 million in local funds annually to help pay for teacher salaries and instructional materials,” said Dean Wilson, chief financial officer. “The state’s portion of the funds would provide an additional $2,297,511 that would stretch the school district’s budget further.”

Residents in Lewis Central Community School District voted in September 2014 to extend that district’s ISL for 10 years beyond its next expiration date, which was June 2016. Lewis Central’s ISL includes a property tax of about 54 cents per $1,000 of taxable valuation and a 6% income surtax.

“The issue impacts all school districts, but the impact is greater as the taxable valuation per pupil of a school district decreases, thus creating a funding inequity,” according to an explanation on the association’s website.

“When the state does not fund their portion of the ISL, it does create inequities between districts based upon taxable valuation,” said Eric Knost, superintendent of Lewis Central Community School District. “Costs per pupil are not equal between all districts, which simply means some districts can generate more revenue than others … Regardless, the point remains that less funding equals fewer resources for students.”

Since no one receives the state portion, the disparity between districts varies, said Paul Gausman, superintendent of Sioux City Community Schools, which has the lowest taxable valuation per pupil in the state.

“We often are able to achieve the same amounts district to district, but again it is a further tax on the local property when we don’t receive state aid to make that amount occur,” he told the Nonpareil.