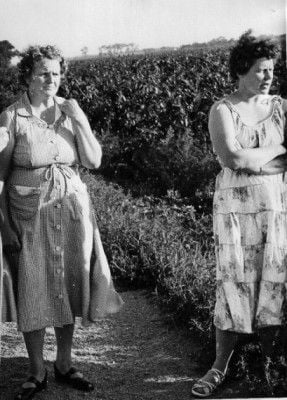 Two South Sioux City sisters-in-law, Mrs. William Oehlerking, 47 (left) and Mrs. Ernest Oehlerking, 33 (right), are pictured standing near the cornfield — with corn about waist high — where the two women and their children discovered the body of Donna Sue Davis Monday afternoon, July 11, 1955. Ernest Oehlerking farmed the 40-acre cornfield, and earlier had discovered Donna Sue’s night clothes in a nearby ditch. 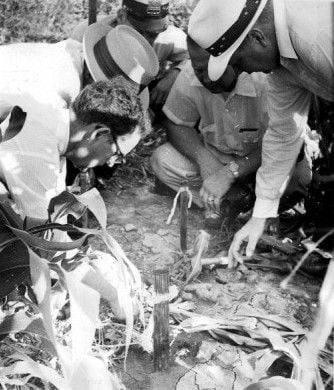 Sioux City police, S. Sioux City police and FBI agents investigate the area in the cornfield where Donna Sue’s body was found. A broken cornstalk indicated her body had been thrown from a vehicle.

Two South Sioux City sisters-in-law, Mrs. William Oehlerking, 47 (left) and Mrs. Ernest Oehlerking, 33 (right), are pictured standing near the cornfield — with corn about waist high — where the two women and their children discovered the body of Donna Sue Davis Monday afternoon, July 11, 1955. Ernest Oehlerking farmed the 40-acre cornfield, and earlier had discovered Donna Sue’s night clothes in a nearby ditch.

Sioux City police, S. Sioux City police and FBI agents investigate the area in the cornfield where Donna Sue’s body was found. A broken cornstalk indicated her body had been thrown from a vehicle.

She was writing book reviews for a Sioux City newspaper, which even 10 years ago wasn’t considered eye-grabbing material for the masses. An editor asked her to take on a series of cold cases – unsolved murders – the kind you see on TV shows. People love that stuff.

With three unfinished novels in a drawer, Jody Ewing could hardly turn down an assignment. And when she heard about Donna Sue Davis, there was no going back to writing about books. The 21-month-old toddler with clear blue eyes and curly blond hair was snatched from a crib in her home in a working-class Sioux City neighborhood and later raped, sodomized, beaten and killed from a severe blow to the head. Her killer was never found.

“I couldn’t believe in 1955 that someone could commit such a heinous crime and not be caught,” Ewing said.

Ewing ached for Donna Sue and the other victims. Thoughts of their still-free murderers kept her up at night.

The Onawa woman launched Iowa Cold Cases (iowacoldcases.org) to document each case, so those victims would be remembered, and their assailants would be kept sweating. People flooded her website, asking if she could feature their fallen family member. She eventually worked on it full time as it grew to 540 cases.

Starting today, Iowa newspapers across the state are launching a project dedicated to telling the stories of Iowa’s unsolved homicides. Ewing, 56, still haunted by justice not yet served, is a reliable guide through these mysteries.

In addition to writing on her website, Ewing has been a constant voice in the ear of Iowa law enforcement officials and acts as a buffer between them and family members who are often frustrated with their efforts.

To them, Ewing is the person who will still listen, the one who hasn’t given up hope.

“If you could hear the voices of these family members ... ” Ewing said.

She taps away at her computer through the night. She didn’t sleep at all before a recent interview in her Sioux City home, whose front room is equipped with a large desk bulging with deep case files.

She works for no pay, often 16 hours a day. She and her husband, Dennis, live sparsely on his disability check after his stroke a year ago. Her nonprofit receives no grants, and she says she gathers an average of only $500 a year in donations. She even sold her truck.

Ewing says the cases are like a puzzle you can’t quit working on. One can hardly ask her about her own life; she diverts the conversation to one unsolved case after another.

“I’ve never seen her have this kind of passion for anything else,” said sister Kim Berens of Sergeant Bluff.

Family members have subtly suggested she take a paying job and, not so subtly, slipped her employment want ads.

It’s not just empathy that keeps Ewing going, but a quiet outrage in the pursuit of unrealized justice.

She talked to Veronica Lack of Waukee on the telephone for hours the other night. She is the mother of Adam Lack, a death chronicled extensively on her website.

Veronica Lack said her family was involved in a longtime dispute with Mitchell County landowners over water runoff that she claimed fouled the environment and harmed their farm in the county. It got ugly, she told the Register, and the family was bullied.

Adam Lack, 33, a Brown University graduate with expertise in environmental issues, had enough one night in July 2008, and went out to investigate an intruder on the family land, his mother said. He rolled his pickup negotiating a curve, was pinned in the vehicle and found dead several hours later.

Veronica Lack shared photographs of the scene with Ewing and information to suggest that his death was no accident.

“She is looking for justice in our family’s case. And there are hundreds that need justice in Iowa that are just being put on a shelf,” Veronica Lack said.

Mitchell County Sheriff Greg Beaver said Lack’s case was ruled a motor vehicle accident because there was no indication it pointed to foul play. Authorities are not investigating it further.

The website sometimes skirts on the thin lines of insinuation, naming people with links to the victim or the crime scene who have never been charged or officially listed as a suspect.

“You have got to be careful what you put out there,” said Mike Motsinger, a special agent with the Iowa Division of Criminal Investigation. “There is a difference between what someone said and having probable cause to charge someone with it.”

That said, Motsinger follows up on tips from Ewing. Family members will remember or tell her things police haven’t heard before.

“I can’t say it’s led to an arrest or anything, but it’s good information,” he said.

Ewing says she has a knack for extracting information from people – mainly with kindness and a listening ear – and family members will get investigative files from authorities and fax them to her.

That’s how she got the autopsy report of Kim Loose, who reportedly fell out the door of a moving car in 1998 in Scott County. Authorities there say the death was ruled an accident, and it has never been investigated as a homicide.

But Ewing studied the information and a photograph of the accident scene sent by the family. She came to the conclusion the injuries to Loose’s body and what killed her were inconsistent with that story.

One of the three young men at the scene of the accident disappeared the next day and was later found dead in the river after leaping off a bridge.

But Ewing took some of the information off her website because she was concerned about future suspects using it to change their statements to authorities.

In another case, Ewing is so convinced a killer is living in a northeast Iowa community that she put his name on hidden metadata, so when people search for his name online, her Iowa Cold Cases website comes up.

“I push the envelope. If I’m safe, I push it more,” Ewing said. “One woman said she was going to sue me for slander.”

She said she didn’t worry because the woman didn’t realize that if what Ewing writes on her website is wrong, it would be libel.

Ewing couldn’t fathom the twist of fate when her own stepfather ended up on her website. Earl Thelander died after copper thieves stripped the gas lines from a home he was preparing for renters in Onawa and a fire broke out when he plugged in a fan.

“Eight years have passed,” Ewing’s mother, Hope, said of the loss of her husband. “Money makes cases go cold. But people know. I’m sure other people Jody helped out have the same issues. But you can’t wake up every morning obsessed with it.”

Ewing can’t stop, just knowing the killers are out there.

She’s become friends with the mother of Jaymie Grahlman, who died in a fire while being watched by her father and girlfriend in Cedar Rapids in 2003. A neighbor with a low IQ was charged and acquitted, but Ewing said he was a convenient “patsy” for the person she suspects after looking at autopsy photos and seeing mysterious burns on the girl’s chest inconsistent with a fire.

She doesn’t take credit for solving crimes but feels like she has played a part.

For example, Holly Rae Durban’s case in Shenandoah went cold before Ewing talked to Durban’s sister, who said it was Holly’s boyfriend who killed her in 2009. Ewing posted the story, and a couple of years later, Brian Davis was charged. Last February, he was convicted of first-degree murder.

“None of the information (on her website) were we able to use in the case, but it did help keep the case in the public so they don’t forget about the victim,” said Darrell Simmons, a DCI special agent. “We do what we can until we reach a dead end, but sometimes we need more information, so what Jody does is a huge benefit.”

It doesn’t come without risks, perceived or otherwise.

In the middle of one dark night, she answered the phone to hear this: “I didn’t kill Michelle.” Another time she heard a voice over the phone tell her about two men who got away with a murder, had changed their names and are now successful residents in an Iowa town. She looked up the names and photographs, and, sure enough, they were the same two men in images of leading suspects in her research.

Ewing locks all her doors now. She is considering taking training on the proper firing of a gun. She uses a code name to protect one man who said he’s been threatened after he came to her with information that he witnessed a cold case murder.

“I never used to be this paranoid,” Ewing said. “But I’ve seen people killed over such small things. I try to put myself in the position if I was threatened. Could I shoot someone? I could not go out and murder someone. What fascinates me is that most people can get away with murder.”

Which brings her back to the case of little Donna Sue Davis.

The mystery obsessed her. She begged a police captain to tell her who she thought might have done it. She studied the crime, drew maps of the neighborhood, interviewed everyone she could – and never wrote about the case. It was too important to her to share it yet.

Years later, her research file on the case bulged to several inches thick.

Through her research, Ewing is convinced she knew the killer, confirmed privately by law enforcement, and knew where he lived. She tried to come up with a reason to knock on his door but didn’t before the elderly man died a few years ago.

Our View: Joining a search for justice

Starting today, The Nonpareil is among the Iowa Newspaper Association newspapers participating in a year-long project with IowaColdCases.org t…