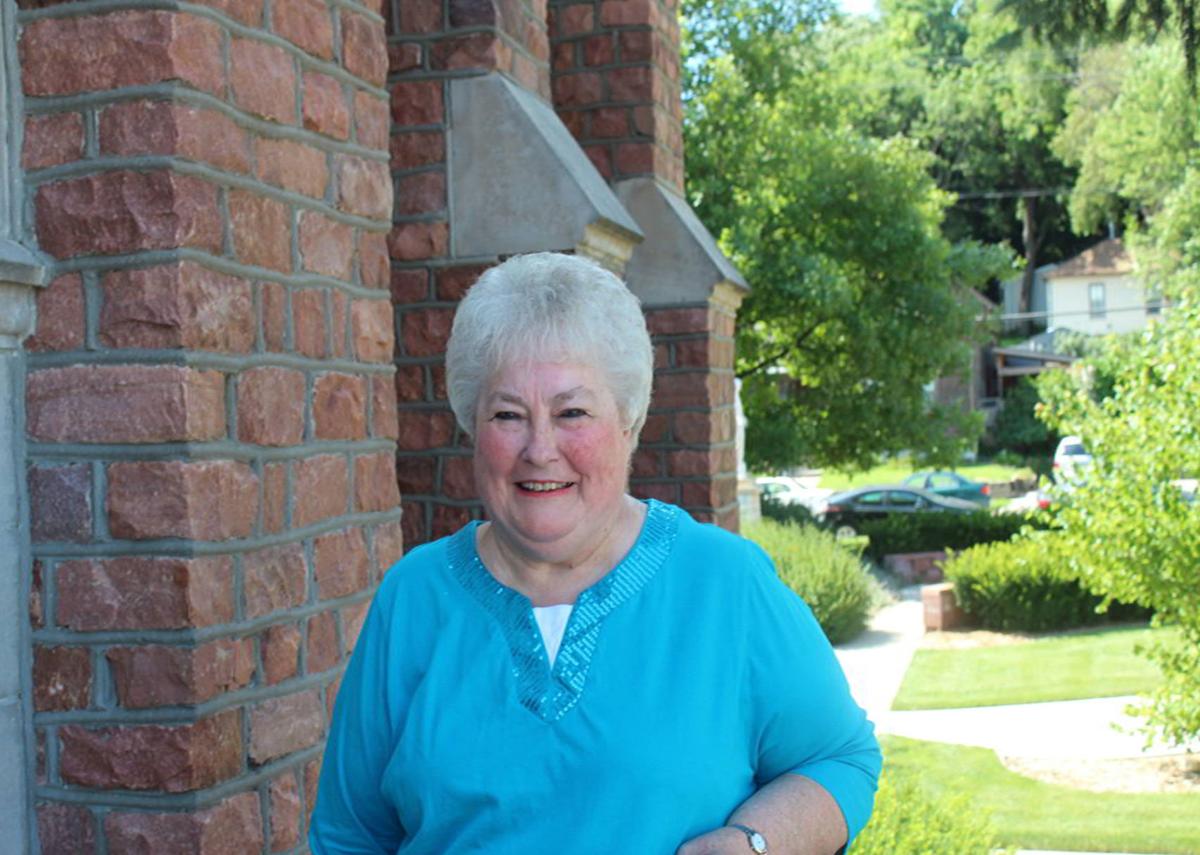 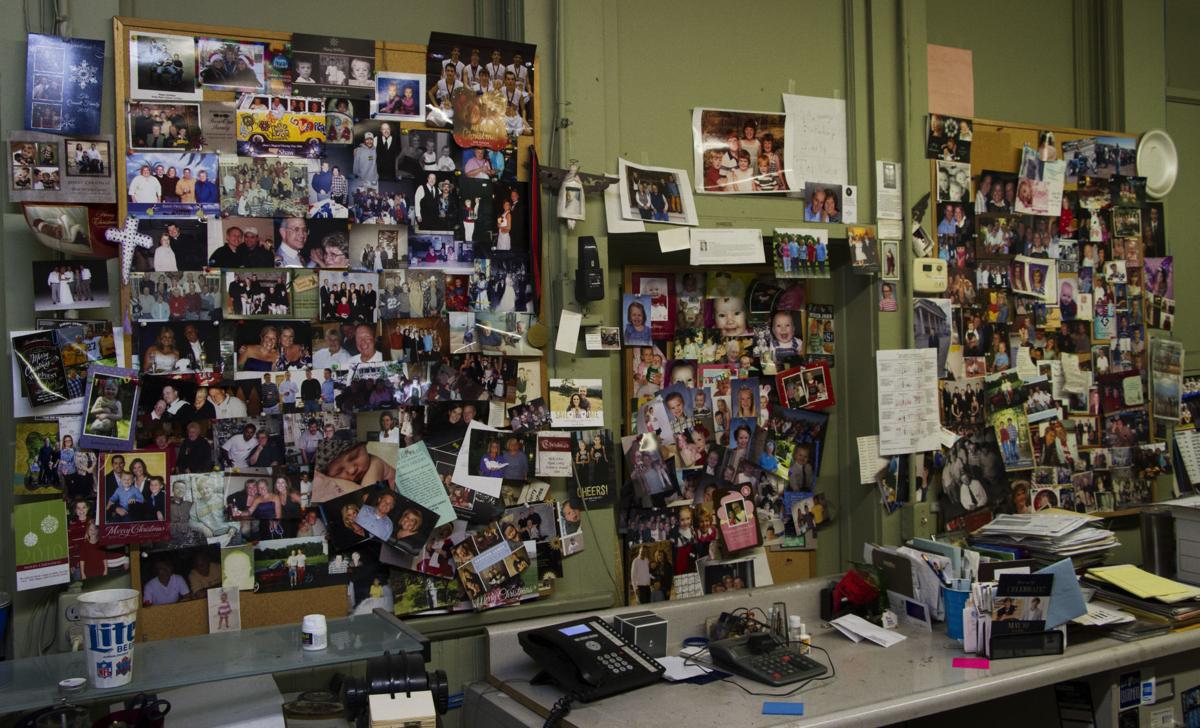 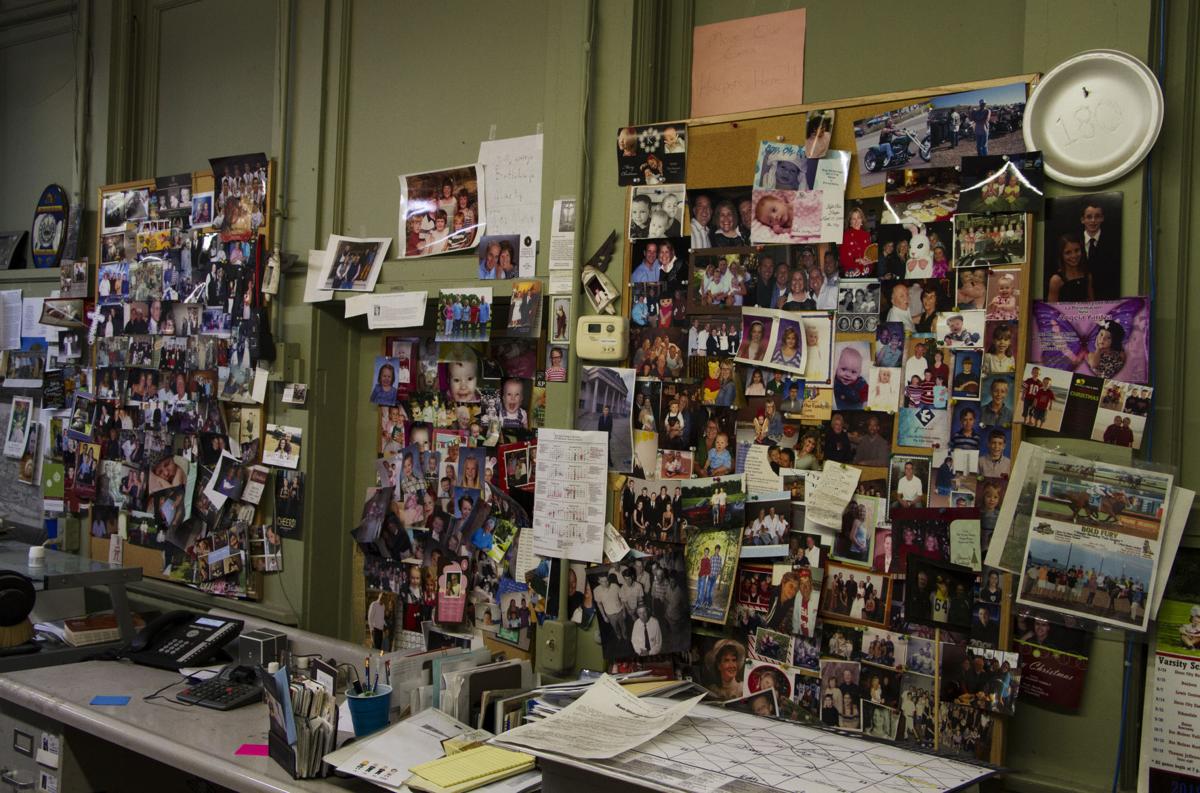 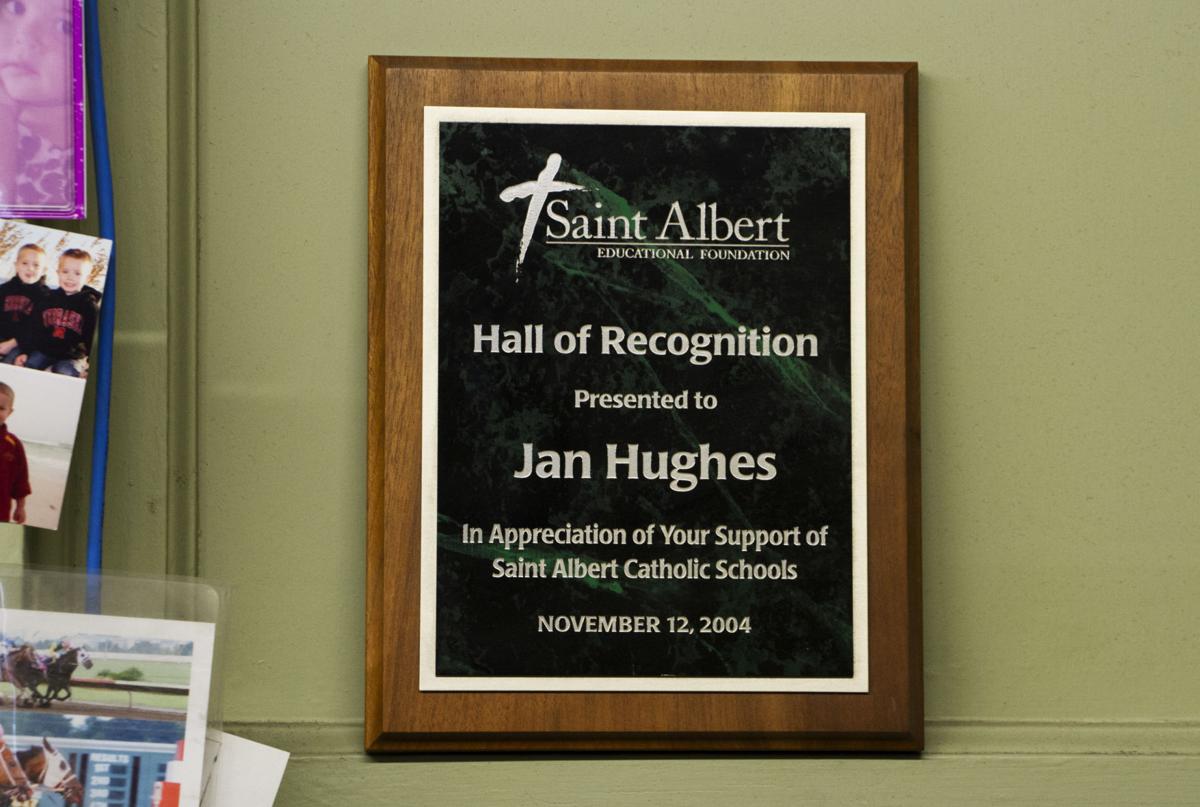 The Saint Albert Educational Foundation honored Jan Hughes in 2004 for her support of the school.

The Saint Albert Educational Foundation honored Jan Hughes in 2004 for her support of the school.

Hughes, the oldest of 14 and mother of 6; an active and devout member of Corpus Christi Catholic Parish; a long-time supporter of St. Albert Catholic Schools; and the owner of Kelly’s Carpet and Furniture Council Bluffs, died Saturday following a three-year battle with cancer.

Above Jan’s desk inside the office at Kelly’s Carpet and Furniture, 825 W. Broadway, is a wall of pictures. Over the years, the collage -- which includes photos of family, friends, newspaper clippings, funeral service programs, pieces of children’s artwork and more -- has grown to encompass almost 14 feet of wall space.

Her son, Chris Hughes of Council Bluffs, said family was the most important thing to his mother. To her, the term family went beyond the traditional sense. Even though she had 13 siblings, six children, four grandchildren, numerous nieces and nephews, cousins and more, she often treated her friends with the same love and compassion as she did her kin.

“It didn’t matter if it was a family member or a waiter at a restaurant, when she talked to people she actually listened, and she cared,” Chris said. “Even in the hospital, she knew everything about every nurse and every doctor that took care of her. They became important to her. She cared about them.”

Jan battled an ovarian sarcoma over the last three years, going in and out of remission. Shortly after Easter, she found out that she would have to undergo dialysis treatment because the chemotherapy was having an adverse effect on her organs. Though his mother “hated” the treatment, Chris said she underwent it with a specific cause in mind.

Jan was also active in the St. Albert Catholic School community. An alumnus of Mount Loretto Catholic High School, she was one of the founders of the St. Albert auction, which still continues every spring. All of her children graduated from St. Albert and her grandchildren are students there now.

She often volunteered at the school and at school events and was a common sight wearing green and gold at school athletic events, said JoAnn Jensen, director of enrollment and school relations at St. Albert. In 2004, the St. Albert Educational Foundation inducted her in the school's Hall of Recognition.

“Jan has served as kind of a matriarch to the St. Albert community,” Jensen said. “Many people knew her, not just because of her work at Kelly’s Carpet, but here as well. We have a lot of staff and former students who knew her and had been impacted by her generosity.”

Both Chris and Jensen said it wasn’t uncommon for Jan to help local parents and families with their St. Albert tuition costs so that their children could attend school there.

“She truly believed in a Catholic education and wanted it to be available to as many people as it could,” Jensen said. “St. Albert is a family, and she was one of the best. Her presence will be missed.”

Jan took the helm at Kelly’s Carpet in Council Bluffs in 1999, following the death of her husband, Jerry. Jerry split up the Kelly’s Carpet & Furniture business in the late 1970s, letting his brother, Mike, run a location in Omaha, and leaving Jan, Chris, and daughters, Lori Hughes-Ray and Shari Hughes, to operate the Council Bluffs location. Having expanded into Lincoln, Nebraska, siblings Chris, Shari, Lori and Kelly Krohn continue to run the family business. Jan had two other children: Jamie Hughes, and Marty Hughes, who died in 2014 following his own battle with cancer.

Chris said Jan’s faith guided her penchant toward helping others, even at work. She often donated furniture to families who were in need or who had fallen victim of a disaster or fire.

Throughout the year, but especially during the summer months, kids from the neighborhood around the store would come to her looking for ways to make a little money.

“These kids would come to the store -- some of them were from rougher areas -- and they wanted to work to make a few bucks,” Chris said. “Sometimes, it was to help their families out, other times it was just money they could use for fun like to go swimming or something. Every day, she would hire them.”

Jan would also go to the grocery store and purchase bags of groceries for the kids to take home.

“She felt that giving was more important than receiving,” Chris said. “She truly cared about people and wanted a better world for everyone.”

Per her wishes, a wake service will be held at 5 p.m. Tuesday followed by a visitation until 8 p.m. at St. Albert High School gymnasium. The funeral Mass will be held at 10:30 a.m. Wednesday, also at the school. Interment will be in St. Joseph’s Cemetery in Council Bluffs, followed by a luncheon at St. Albert. Memorials will be directed by her family. Kelly's Carpet Council Bluffs will also be closed Wednesday.

“She was kind, friendly and giving,” Chris said. “The world would be a better place if more people were like my mom.”