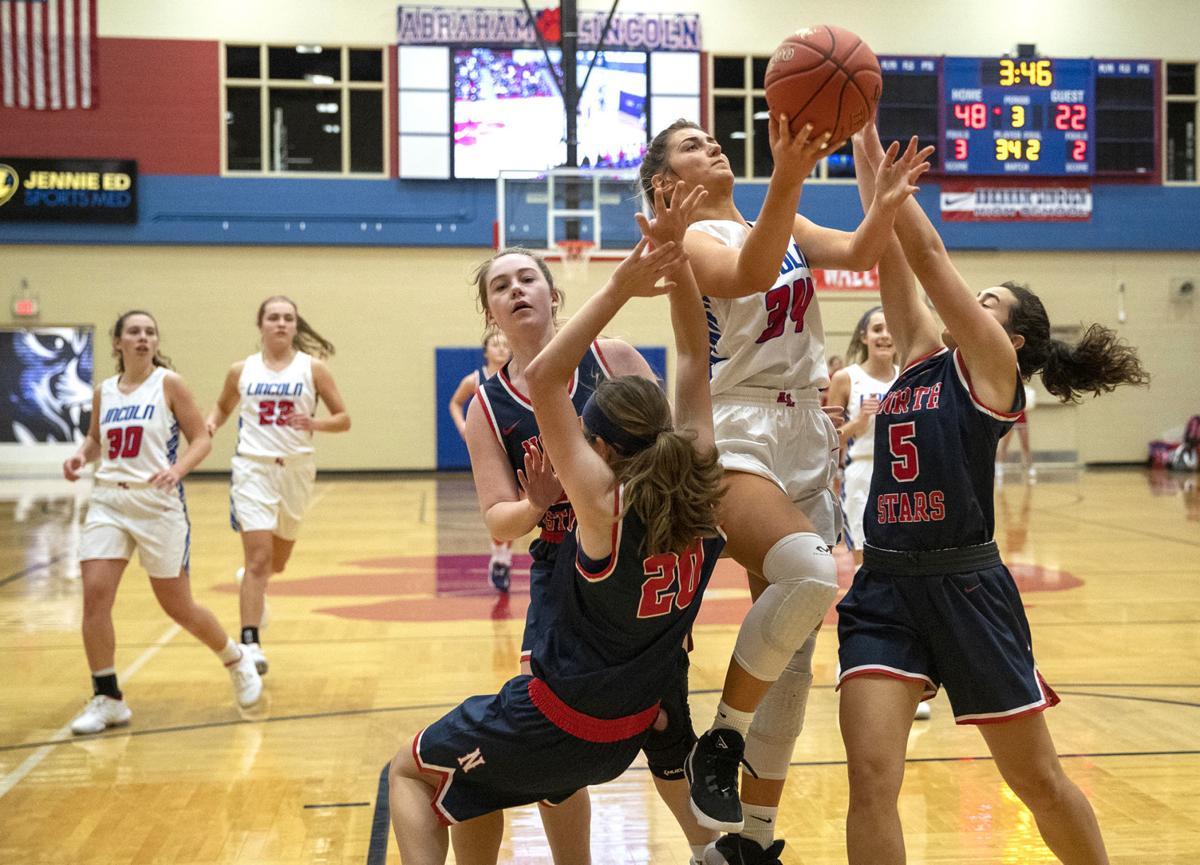 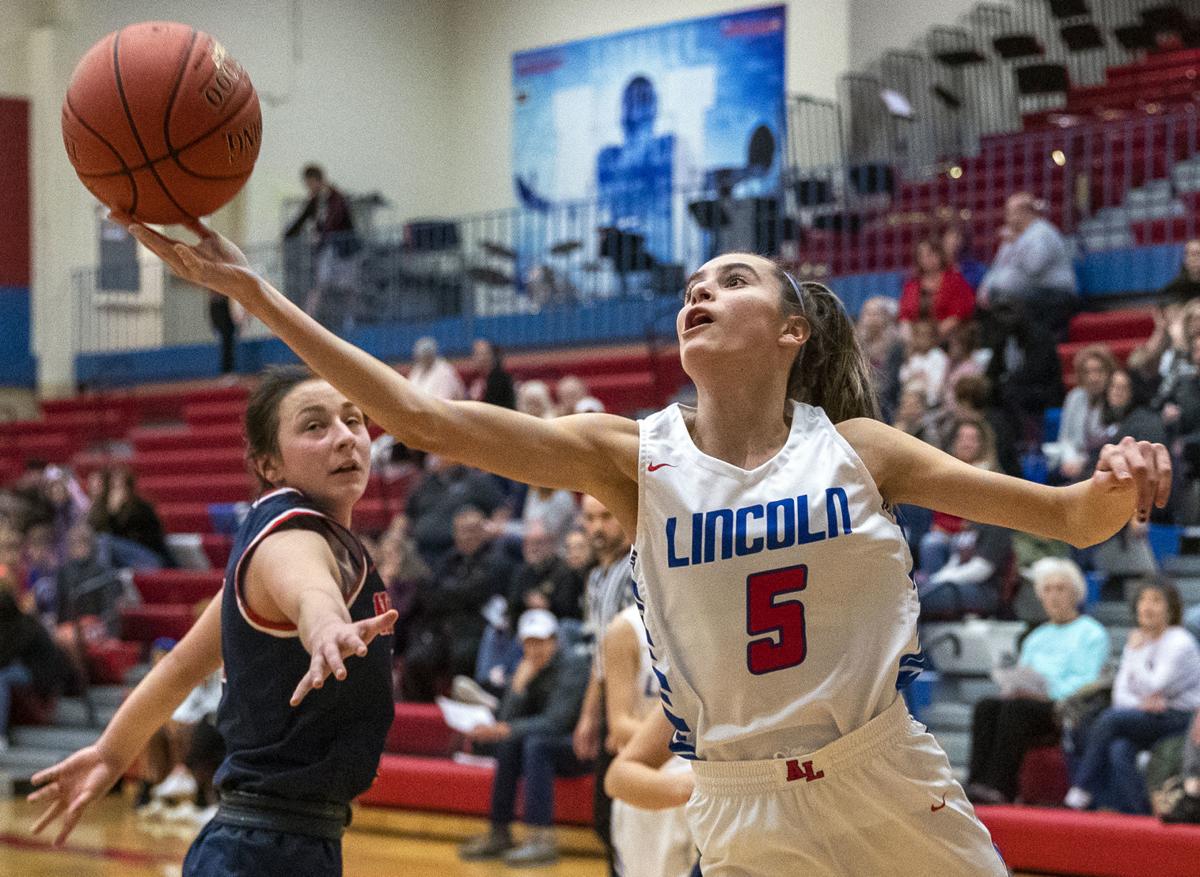 Abraham Lincoln’s Jillian Shanks (5) gets past Sioux City North’s Olivia O’Brien, left, to take a shot during the third quarter on Friday, Dec. 6, 2019. 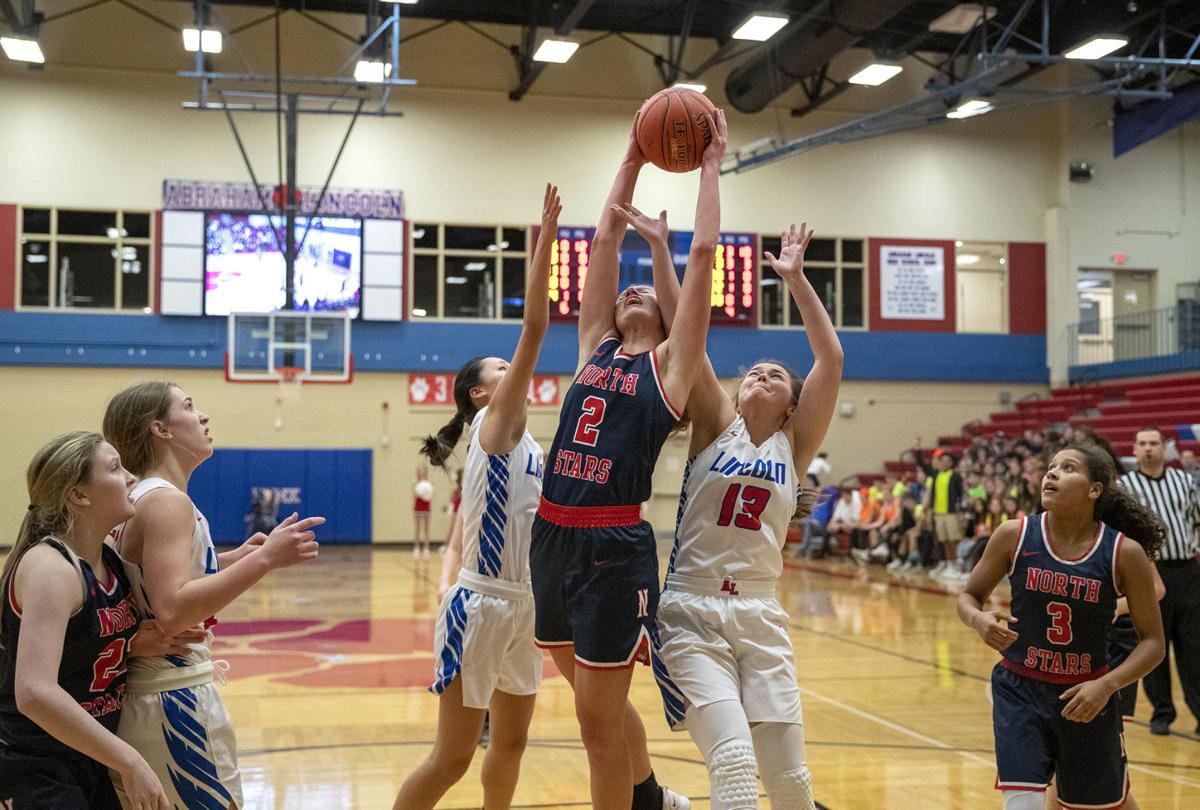 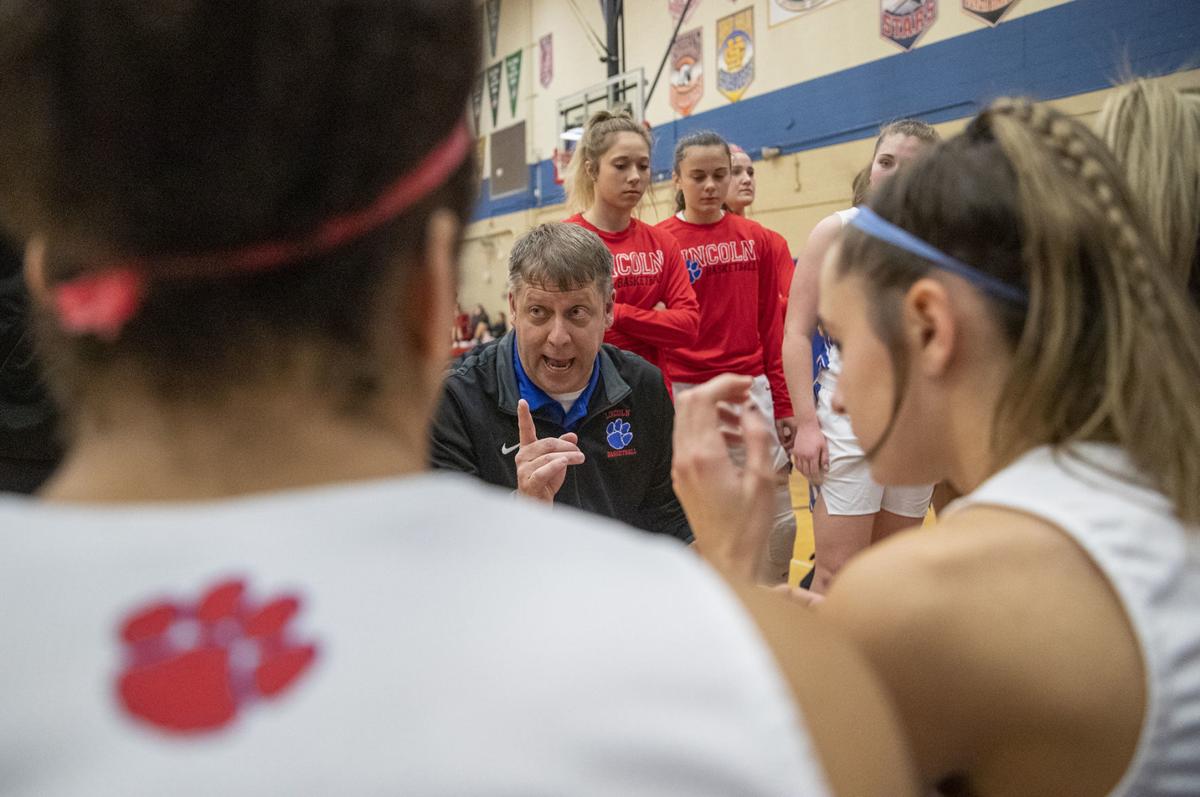 Abraham Lincoln head coach Chad Schaa speaks with his team between the third and fourth quarters on Friday, Dec. 6, 2019. 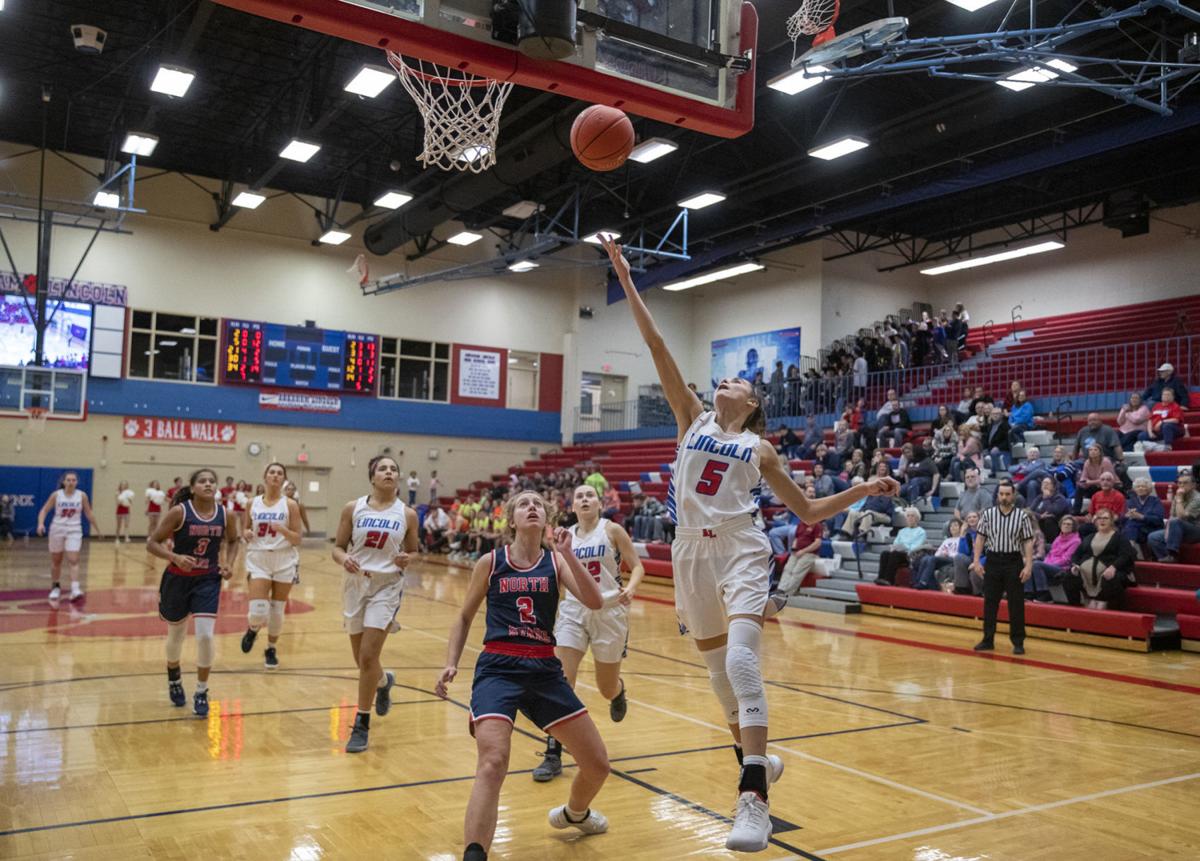 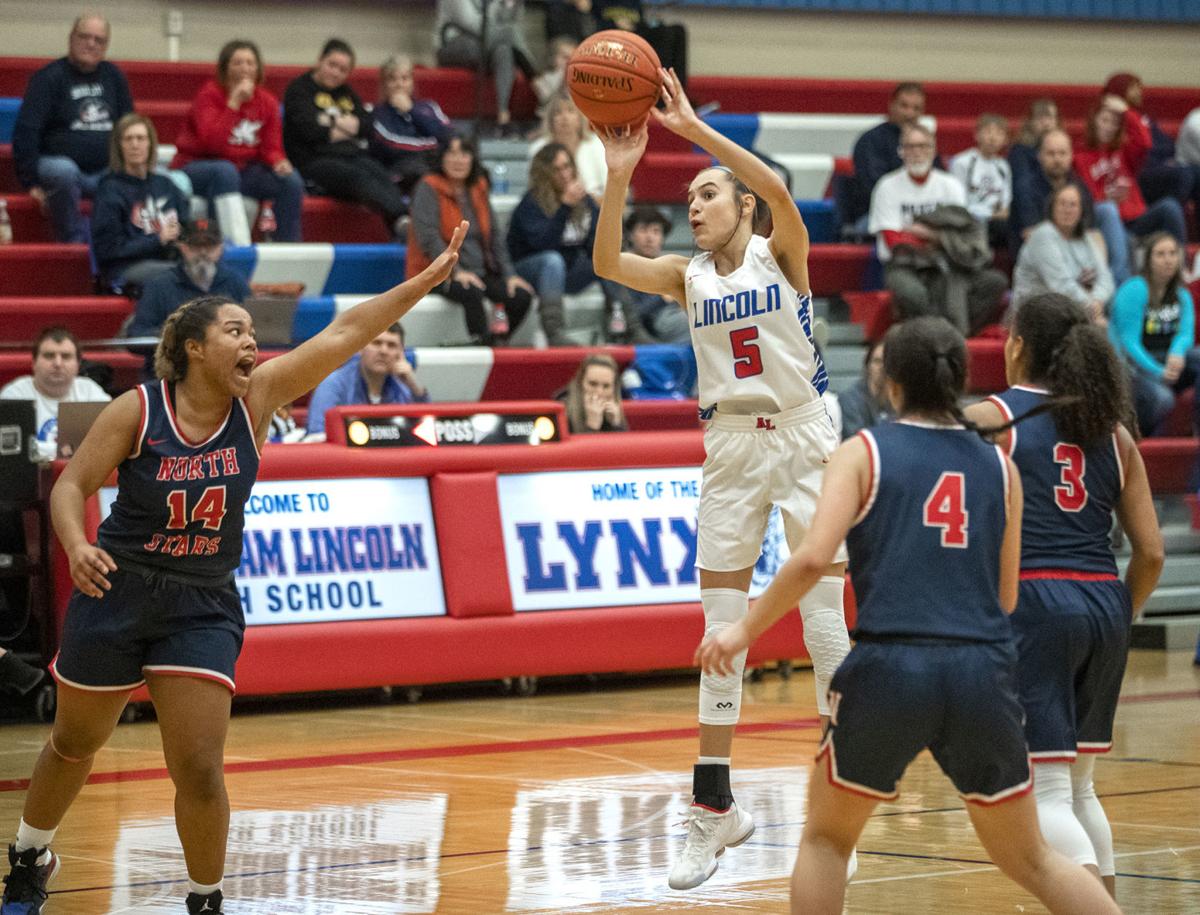 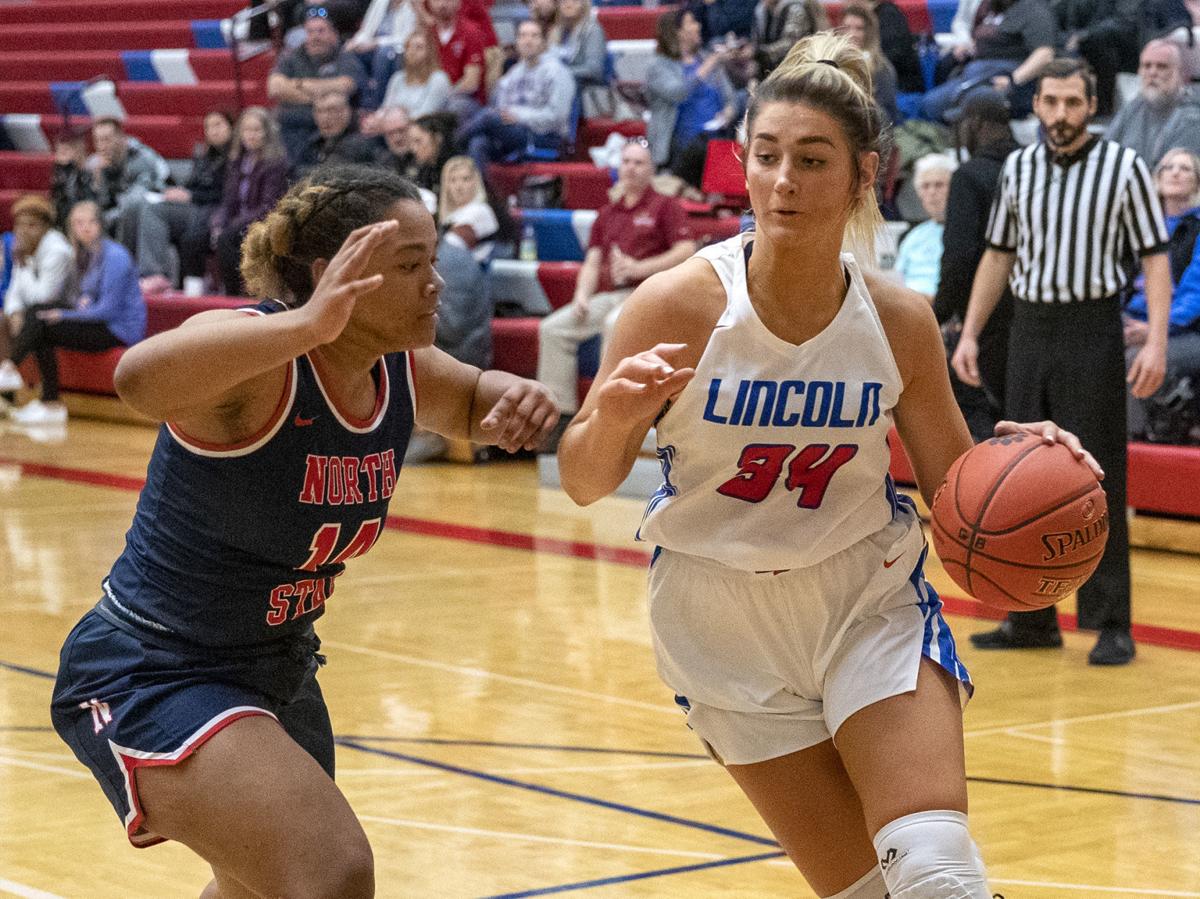 Abraham Lincoln’s Jillian Shanks (5) gets past Sioux City North’s Olivia O’Brien, left, to take a shot during the third quarter on Friday, Dec. 6, 2019.

Abraham Lincoln head coach Chad Schaa speaks with his team between the third and fourth quarters on Friday, Dec. 6, 2019.

“We wanted to start off fast, something positive and make our shots,” Abraham Lincoln coach Chad Schaa said. “I thought we set the tone of the game.”

Abraham Lincoln senior Lucy Turner led the way offensively, scoring 21 points on the night. The 5-foot-11 forward started off on fire, going 5 for 5 early in the first half. Turner ended her night 8 of 14 from the field and 1 for 1 from the three-point line. Turner also had three steals and rebounds.

“I was flowing good in the beginning,” Turner said. “It’s good to have the first conference win. I had fun playing; I think we played with a lot of intensity.”

Junior guard Jillian Shanks, averaging 23 points a game, scored 15 for A.L. Like Turner, Shanks had a hot shooting touch early. Shanks was 4 of 5 on 3-pointers and also collected three rebounds and one steal.

“Jillian’s our point guard and she does a nice job scoring for us, and running our offense,” Schaa said. “She does all the little things really well. Defensively, too.”

Coming off the bench, Bailey Girres chipped in 11 points and seven rebounds. Girres was 4 for 4 from the field and 3 of 4 from the free throw line. Girres was forced into early action when Kayla Schleifman got into foul trouble.

“Bailey stepped up tonight,” Schaa said. “Coming off the bench cold, and she filled in when we had some issues inside. This was probably the most minutes she’s had all year, she showed she can be out there.”

Abraham Lincoln got out to a big lead and never looked back. The Lynx scored 27 points in the first quarter. Then followed that up with 12 in the second quarter to take a 39-18 lead into the locker room.

“Tonight we wanted to start off with a win in conference, and we got that tonight,” Schaa said. “Now we move to the No. 6 team in the state in Waukee. We’re excited for the challenge.”

A.L. showed off what it can do with good energy, ball control and production off the bench. It’s only the third game of the season, and improvements can always be made.

Up next for Abraham Lincoln is Waukee, which comes to town today. Waukee will provide a good early test for A.L.

“We don’t get those teams that usually come, so it’s a great opportunity for us.”