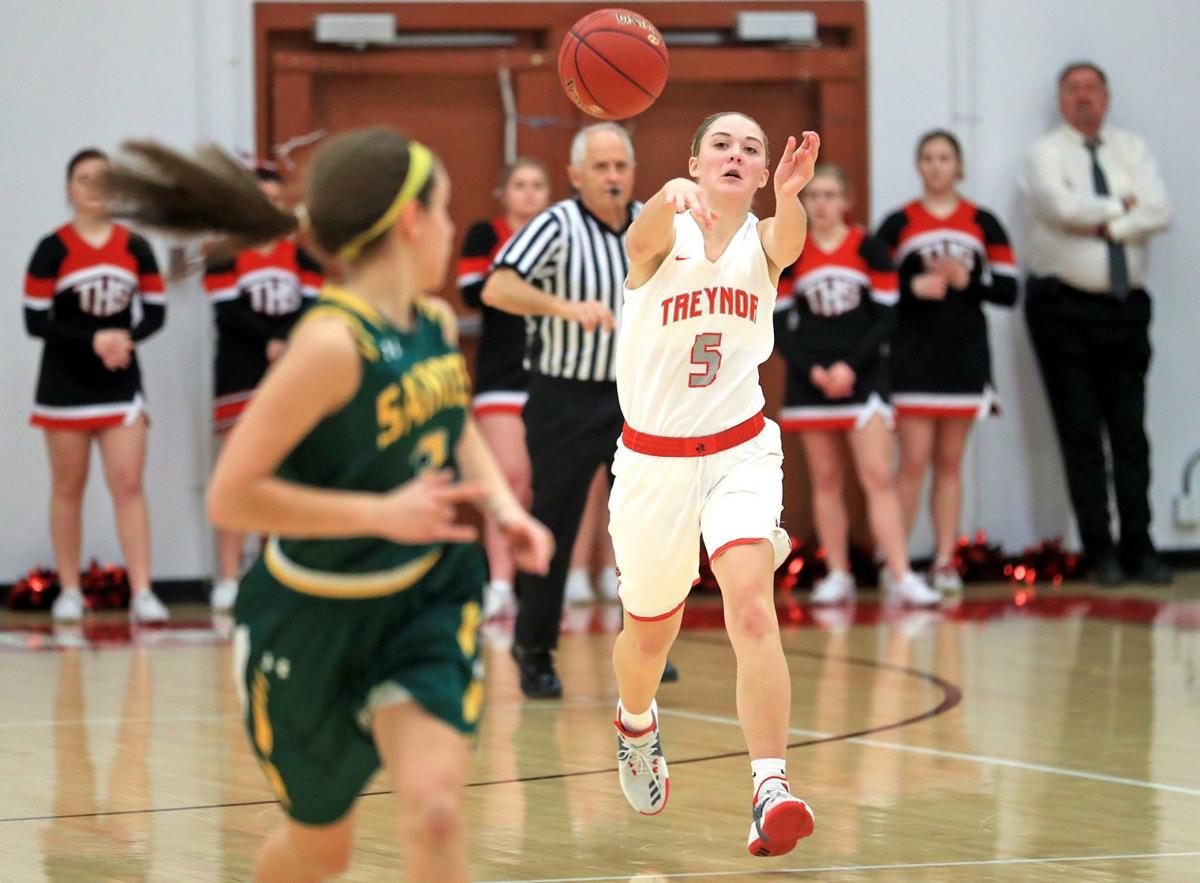 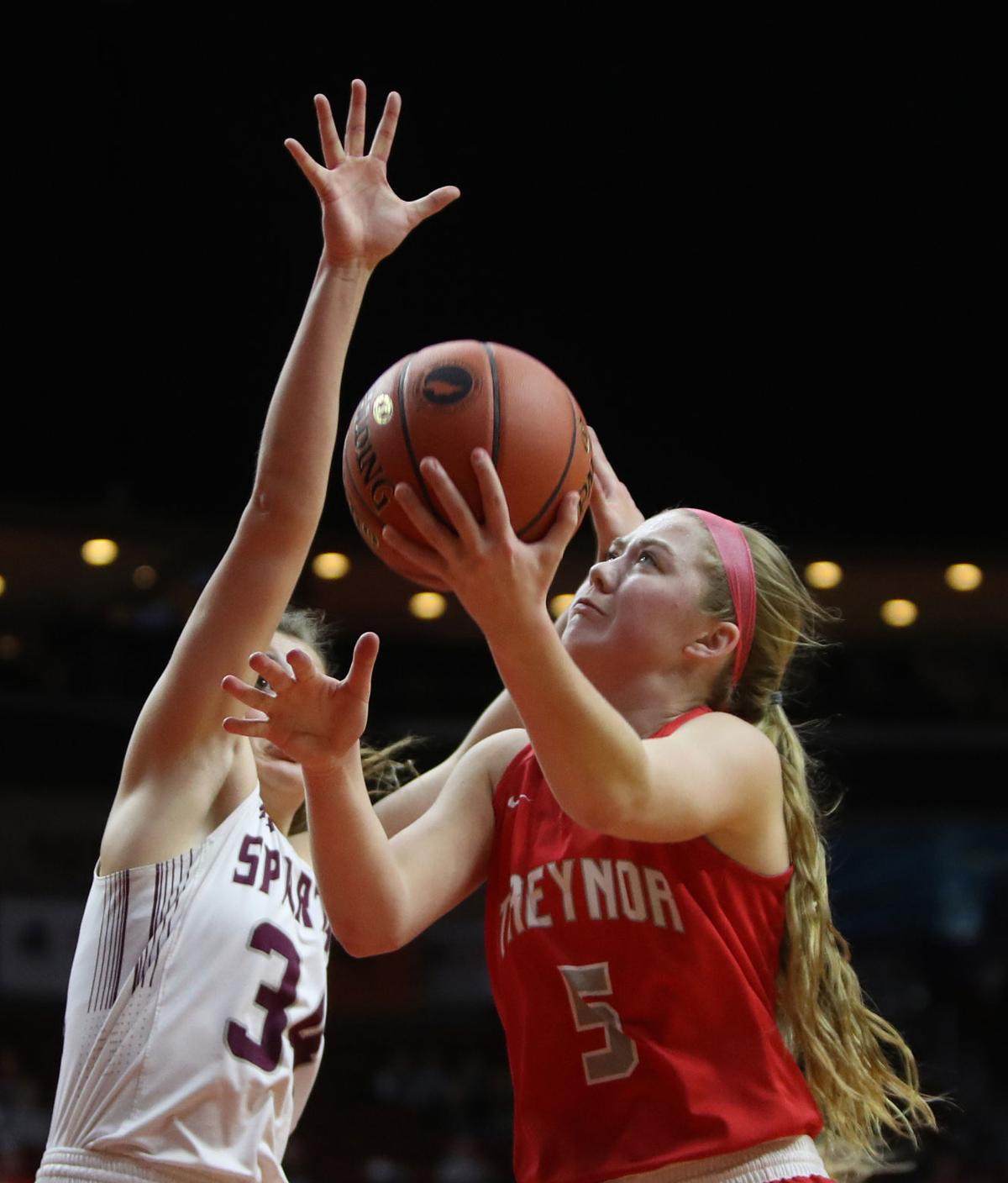 Treynor’s Konnor Sudmann goes up and under for two of her 17 points in the state final.

Treynor’s Konnor Sudmann goes up and under for two of her 17 points in the state final.

*Editor’s note: This award was selected by the previous staff that supplied sports content to The Nonpareil.

Prep basketball fans know of Konnor Sudmann’s skills. After all, it’s her preferred sport. The proof is in the state championship the Cardinals won in March.

Volleyball fans know firsthand that she’s not a one-sport standout.

And before her senior year of high school at Treynor, soccer and track fans got to see her versatility.

But this summer may have provided the most striking example of Sudmann’s wide-ranging athleticism. She hadn’t picked up a softball or bat since the seventh grade. With no plans to play summer basketball, she found herself able to satisfy an ongoing request from good friend and standout pitcher Sydni Huisman to come out for the sport.

Treynor qualified for the state softball tournament, capping a year in which Sudmann also helped the volleyball and basketball teams get to state.

Following such a decorated final year at Treynor, Sudmann is honored today as The Daily Nonpareil’s Area Female Athlete of the Year.

Sudmann is currently a few weeks into her freshman year at Briar Cliff University, where she will play basketball.

As she prepares for her first college season, where she will focus on only one sport, she can reflect fondly on such a decorated farewell to prep sports.

She and her classmates finally broke through to Cedar Rapids and the state tourney after falling short their first three years.

“We had been working towards that our whole career,” Sudmann said. “We were so close our freshman, sophomore and junior years. To be able to get to state our senior year was icing on the cake.”

Without question, the most satisfying aspect of the past year came with basketball. Two years after a controversial charge call in the state finals ripped a potential championship from the Cardinals’ grasp, and one year after making it to the semis and falling short again, Treynor claimed state gold, going 26-1 and earning a convincing 48-30 win over Grundy Center in the finals. Sudmann, a 5-foot-9 point guard, led the team in points per game (17.0), free throw percentage (84%), 3-pointers (51), assists per game (3.7) and blocks (22).

“Especially the last six games in her basketball career at Treynor with the three district games and the three state games, I could just see how focused she was,” Treynor coach Joe Chapman said. “She was just locked in to every little detail. With her ability to handle the basketball and shoot free throws, it’s such an advantage to utilize her ball handling. The only way to slow the game down or change tempo was to foul her.”

Dealing with state heartbreak was tough as a sophomore and junior, but Sudmann said winning as a senior alongside her classmates, many of whom had much bigger roles by their senior year, was especially satisfying.

“Our grade grew a lot,” she said. “We were able to gel a little better. There were some people that didn’t play too much sophomore year and then were starting as seniors. Then we had some underclassmen step up and were great on defense and hit big shots when they needed to.”

Sudmann isn’t flashy. She’s not outspoken. She leads more by example than by being a voice in the huddle.

But she’s also someone who raises her game as the stage gets bigger. All of those qualities are why Chapman will miss his point guard.

“She’s just pretty unique how she approaches the game and how she handles everything,” Chapman said. “She never gets too excited, so people took that as reserved. She loved the big stage, and no stage was ever too big for her. When it was time to perform, she did. She’s not much for the limelight as most athletes are. It’s kind of hard to imagine that as talented as she was.

“We just had talks throughout the season like, ‘Hey, you’re going to have to step up.’ She always just said, ‘When it’s time, I will.’”